Even though we haven’t had a video in awhile, we have not been sleeping.  We have been busy.  Really busy.  🙂

Along with the title topic we also covered today:

For our show today we cover the following:
– eSports in a LAN center and the new ESPN eSports initiative
– Buying and Selling LAN Centers
– ggCircuit Winter Season Updates
– 2015 Review and 2016 Predictions for ggCircuit

From today’s show we covered the following topics:

Here is the latest video from our weekly Twitchcast.  This week we cover:

– Besides consoles and PCs, what other entertainment products can a center offer?
– The importance of keeping things new and fresh in existing centers.
– The core of ggCircuit, together we are greater than the sum of our parts.
– Linking game accounts in ggCircuit
– Center Spotlight:  OverZone Extreme LAN House from Brazil, South America
– ggCircuit Fall 2015 season recap
– Grand Prize drawing winner!

Here is this week’s video for new and existing LAN centers.  The topics of discussion this week include:

Hopefully this is the first of weekly show we plan on doing each week that will help me help you.  What I mean by that is the number of questions I am getting each week is really increasing and this is a way for me to spend an hour to hopefully help many of you at one time.

A variety of systems is good, but only having a couple will make them not as attractive for group gaming or team events.

I am going to try and post a few quick blogs each week answering some of the repeated questions that I get from potential new LAN center owners.  I really try to not be rude, but I am sometimes blunt when giving advice to people that I can tell are not anywhere close to being ready to open a store.  However answering the same questions many times over-and-over becomes a bit tiring.

Here are the things I have observed over the years at our stores and watching other centers open-and-close around the world.   I attribute these stores closing to poor decisions in many areas, but one of the biggest mistakes is choosing the wrong number of systems and wrong set-up around those systems.

Recently I was contacted by someone wanting to open a store with 6 PC, 6 Xbox and 6 Playstation systems.  This is very wrong on many different levels:

– Any kind of event you want to run usually consists of two teams playing each other.  Standard teams for PC games are usually 5 players.  Standard teams for most console games are 4 players.
– LAN Centers are like movie theaters, we do 90% of our business on the weekend.  You have to be able to hold enough paying customers on the weekend to pay your expenses for the month.  That means if your expenses are $10k per month you need to make $2500 each weekend, or $1k on Friday, $1k on Saturday and $500 on Sunday.  Can you make $1k on a Friday with only 20 systems in your store?  Most of us charge around $20-$25 for a day pass.  20 customers paying $20 each for a day pass fills up a store with 20 systems and is only $400 in revenue.
– First time players usually come in groups and want to play the same thing.  If you have 4 Xbox One stations and there is a couple guys playing what happens when 4 friends walk in and want to play Call of Duty together on the Xbox One?  They probably leave and maybe will not come back because they know your place is too small.
– Many games are the same on different systems, you don’t want to buy 2-3 full game libraries for all of the systems.  In the past at our stores we focus on the Xbox for console games and have a small amount of Playstation systems for their exclusive titles only.  Now we are looking at doing mostly Playstation 4 at a new location because Call of Duty eSports will be on PS4 in 2016.

Number of Systems Guidelines
Here are the guidelines I share when someone asks me for my advice on the type and number of systems:
– No matter how big your city/town is, you need to try to start with at least 40 stations.  That way on busy weekends you can break that $1k/day goal in sales
– If you cannot purchase at least 16 of the same console (Xbox or PS4) then just pick one of them and only get a couple of the other for exclusive games.
– Set-up systems in multiples of team sizes for events.  That means 20, 30 or 40 PCs (4 teams, 6 teams or 8 teams of 5 players each).  For consoles shoot for 16, 24 or 32 systems (same number of teams, just 4 players each team)

Equipment Specs and Space
– At our stores we shoot for 36 inches of counter space per player.  That is 4 players per twelve feet.
– Purchase 24″ monitors with built-in sound for ALL stations.  This means PC and console.  No, no, no, no you do not need 200 inch screens for console players.  They are not coming to your store to play on a BIG screen, they are coming to play as close as they can to their friend’s screen.  If every station in the store has the same monitors then moving things around for events is much easier.  Also it makes it easy to have 1-2 spares available (we use the same monitors at our admin stations as well.  *****(Exception)**** The exception for the screens is the Wii U.  We usually have 2-4 stations for Wii U that are on larger screens like 55″ or so and couches.  We also sometimes put a couple of the other consoles on those for unique single player games and for streaming.
– Mount the systems above the players on a shelf, this saves a lot of counter space and floor space.

Here is a mock-up of our Terre Haute store drawing showing how we fit so many stations into 4000 square feet.  We sometimes have 100-125 gamers at our building for special events. 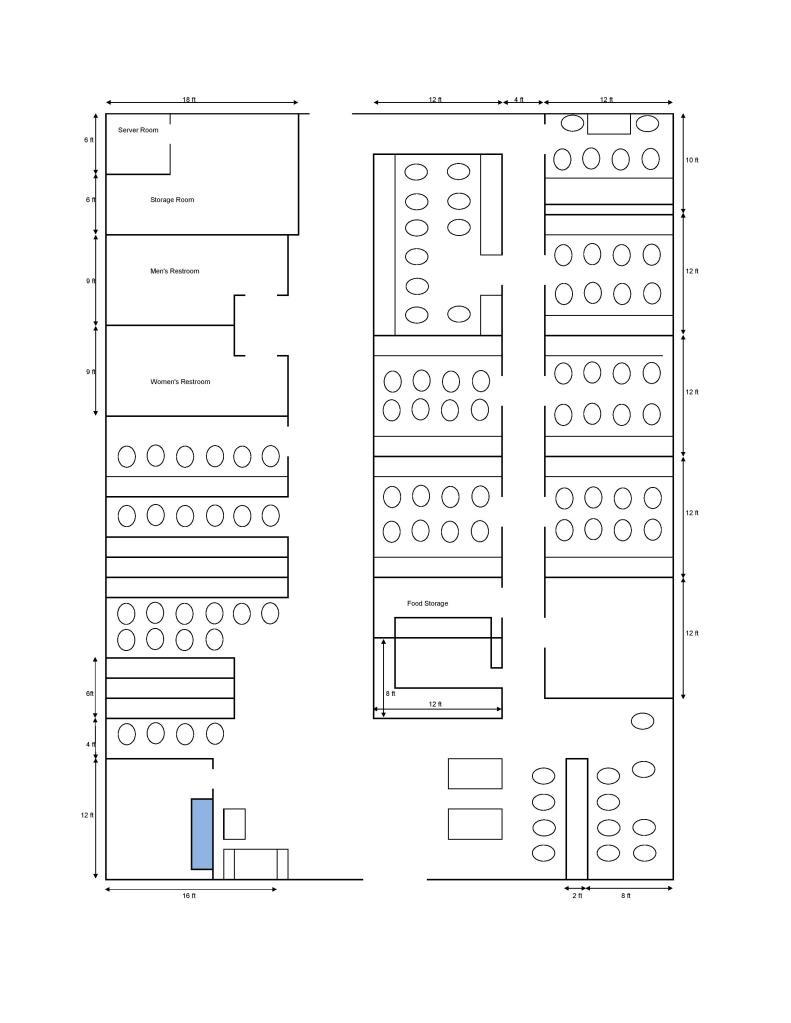 One thing to keep in mind is that I do not recall ever hearing a LAN center say that they wish their store wasn’t so big.  They ALWAYS wish they had more space or more systems.  When you cannot hold enough people on the weekend and you watch those $20 bills walk right back out the door you will find out the hard way.

That being said my biggest advice is to not open a center if you cannot build it big enough to start.   It is false to think that you can add more systems later as it grows.  It will never “grow” if it doesn’t have room to grow.  You will just throw away your money.  If you want to be in this business do it right from the beginning.  Don’t just “test” the market out by starting small.  It will never work.