After 7 years in the business there are many things that I have mastered when it comes to running a LAN center.  However there are still ongoing problems that we fight on a daily basis.  One of the biggest ones on our plates right now is the constant fight to keep our game discs in working condition and how to handle games with online passes and/or download content (DLC).

Over the years I have now built 5 game centers from the ground up, consulted on hundreds of other facilities and also assembled and disassembled huge venues with the now extinct World Series of Video Games (WSVG).  By my estimations I have ran over 100 miles of ethernet cable, set-up over 50 gaming networks and operated over 1000 console stations.

The challenge I have decided to tackle this fall is the problem with the degradation of physical discs over time along with the problem of online passes (EA sports we hate you) and DLC (Activision just charge a monthly fee already, releasing DLC each month is the same thing).  Let me present some of the direct problems and some of our past attempts at solving them.

1.  Physical discs just wear out – I am sure there are some of you who have your game library at home in immaculate condition and the lifespan of your discs is almost infinite.  However in the real world of a game center a physical disc for Modern Warfare 2 gets checked out an average of 10 times per day during the 2 years it is popular.  That is 300 times per month or over 7,000 times in the lifespan of the disc.  That is 14,000 times the disc is handled, once pulling them out of the sleeve and putting them in the console and then again putting them back into the sleeve.  The fact is that the physical discs won’t last the entire lifetime of the game itself, and we end up buying about 5 more discs to replace just 1 original disc. 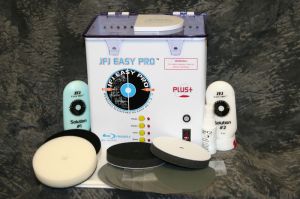 The JFJ Pro Disc Repair Machine is a must have for any LAN center owner.

Attempted Solutions:  When we built our Evansville store the cost of HDMI had finally lowered enough for us to place the Xbox consoles behind the front counter so that the employees are the only ones touching the discs.  This doesn’t cut down on the amount of time the games are handled, but they are handled with much more care than when the customers load the games like they do at our Terre Haute store.  They have less of a problem with broken games but the problem is still there nonetheless.

We also have found the JFJ Disc Repair machine which is by far the best solution for repairing scratched games.  This doesn’t solve cracked games (the center of the disc gets cracked because it is weaker and kids love putting their fingers in the center thinking they are helping by not touching the back of the disc) but it REALLY helps with recovering scratched games.  We wore out our first machine and recently ordered another from eBay brand new for only $125 shipped.  If you have any desire to repair your own games I would highly recommend getting one of these machines.

2.  Sharing Downloaded Games – We spend the money on our 60+ Xbox stations at the store and purchase Xbox LIVE gold for almost all of them.   That gives the players access to play online with their favorite games as a team or against other players in the center.  Also many games now have co-op options that are only online, not over system link anymore.   We have not had much problem with people messing with the LIVE accounts, sometimes they delete them and we recover.  In a few cases they have taken them home on a memory card and we just recover them.

I have thought about downloading the games through Microsofts Games on Demand.  The problem we face is HD space.  Most of our boxes are the arcade versions that only have 4 GB of flash memory.  I would need to buy hard drives for all of them, but would gladly spend the money now on a capital expense that will save us the monthly cost of replacing games that are broken.

Possible Solution:  One brainstorm is to take a room of 8 Xbox systems and download Black Ops for example.  That room would become exclusive to Black Ops.  No discs would ever need to be replaced, but also we wouldn’t be able to share those games with other stations like we can with a disc.  Obviously we wouldn’t be able to do that with very many games.  MX vs. ATV Reflex is popular but it only gets checked out 1 or 2 copies at a time and by many different people.  It wouldn’t make sense to download that game on a station as it many times is not used at all.

3.  DLC Content and Online Passes – This just plan sucks for a game center.  Of course all of the customers want to play Madden 11 online against other real players.  Why wouldn’t they?  Just the same everyone wants all of the map packs for Black Ops to play the new multiplayer maps and the new zombie maps.

At the Terre Haute store we have 8 copies of Madden 11 and about 25 copies of Black Ops.  Those are about the limit of the number of players who all want to play those games at the exact same time.   Players can sit down anywhere in the store and check out those games.  If we assign an online pass to a single eBash Xbox gold account then that spot is the ONLY place a player can play Madden 11 online.  What if someone is sitting there playing Black Ops?  Too bad, either wait or play offline.

Solution:  Again, I am thinking that giving a room a “theme” would work for the most popular games.  There will be no problem making 8 seats in a room Black Ops stations as we almost always have 8 people playing Black Ops.  The problem is with games like all of the sports games.  We don’t usually have many of those checked out simultaneously, and just 1 or 2 people are playing them at a time.

These are all nice, small, temporary solutions to the problem but more like a band-aid on a big cut that needs to be stitched up and heal.  That was the best I could come up with until yesterday when I had a what I believe is a solve-all solutions, once I think through some of the logistics.

I was thinking yesterday of the problem that we can’t move LIVE accounts around very easy that “own” a downloaded game, have an online pass or own the DLC for a game.  We have thought about using USB memory sticks to hold the LIVE accounts and move those around, but those are REAL small and hard to keep track of and I am sure many would “walk out the door”.  Then I remembered that in our Evansville store where we have the consoles at the front counter we run USB over CAT5 to all of the stations.

What if we ran an extra CAT5 cable out to each station and had them all marked and labeled at the front counter?  We could have memory sticks holding Xbox LIVE accounts that own Black Ops and all of the DLC content and we could plug those into whichever console the customer was sitting at in the store.  The big question I need to figure out is if we can download a full game onto a memory stick and if a different Xbox will recognize it.  On a typical memory stick we could hold 2 or 3 full games and all related DLC.

So I am off to do some testing to see if this theory will work….