I was asking someone a few days ago about the number listed next to our Xbox LIVE accounts and they said it was the number of years we had been a subscriber.  Mine has “7” next to it and a bunch of the players at eBash made a big deal about how it was the oldest one they had seen.  I explained to them I was one of the Xbox LIVE beta testers and they didn’t believe me.  Well here you go boys…… 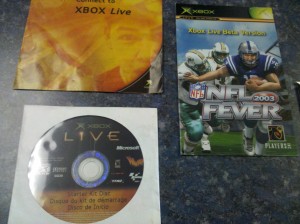 That set me to digging through some old boxes and I found my old Xbox LIVE beta testing stuff.  I am glad that I saved it because it brought back some fond memories.  I remember when my friend and employee at the time Chad Killion and I applied to be in the Xbox LIVE beta.  Everyone in the industry was so pissed off because they were NOT going to pay to use a service that should be FREE (good one “experts” you really were on top of that one).  Everyone at the time was just barely able to afford the ~ $75/month cost of broadband and it was only available to less than half of the population here in the US.

We were running an ISP at the time and basically had T1 connections at our homes and I think that is why I was selected.  They had 5000 people around the US on the service to start and I think Chad was able to get in the 3rd or 4th round of adding beta testers.  The pictures you see here are examples of what was sent to me.  As you can see some of the stuff is pretty amazing like the disc with the LIVE software on it labeled as version 1.0.  I don’t think you can get much more first generation than that!

Honestly the most amazing thing about that service when it came out was the ability to talk to each other WHILE we were playing.  There were PC programs at the time that let you chat back-and-forth but no one had anything going yet to chat while in-game.  I can remember all of the late nights playing RE VOLT and talking to people all over the country.  For any of you that know Chad giving him a microphone online was probably the beginning of the annoying people we all see on LIVE today! 🙂

Speaking of RE VOLT the game was never released publicly on the Xbox that I can find.  By far it was the most enjoyable to play in my opinion and always had the most people online playing.  The concept of the game is that you were driving remote controlled cards but from a behind the car view.  I remember RC Pro-AM on the old NES that had you driving RC cars from a side view of the track but this was just like a normal racing game from a 3rd person view behind the vehicles.  The game had power ups and weapons and you would drive down sewer drains and around construction sites.  It looks like versions of the game were released on other platforms but the one I played never made it to productions according to THIS wikipedia article.

I remember during the 60 day beta test we received other versions over time on discs (they weren’t downloading updates at the time, that didn’t start until later) as they fixed bugs.  At the end of the beta test they sent me a controller case and a bright orange memory card that I still have somewhere in one of my boxes packed in storage.  I used that memory card in my Xbox “duke” controller and still have it for my account.

I was so excited when this arrived in the mail!

Once the service came out the game we played was Unreal Championship.  I mean we REALLY played the crap out of that game.  One thing they offered was that you could turn your Xbox into a dedicated server.  Listen up developers… We LOVED that feature.  We bought 2 more Xbox systems and 2 more copies of the game and kept them at the server room at our office.  Remember we were an ISP so we had fiber coming into our server room and our Xbox servers were always full.  There was not a remote admin option for the Xbox so I would log into the routers, kill the port to the server to kick everyone off, then log in real quick from home to get into the server before it filled up again.

My live tag is BoZack so if you are interested in playing sometime just shoot me a message.   I really need to play some Reach since it has been out a week and I haven’t played yet.  What kind of video game player am I???? 🙂