A week before Shawn and I were going to take back over the Terre Haute eBash store the employees made a list on the white board of the items they want to tackle to re-energize the store.  Shortly after Shawn sent me a Gtalk message that he had another item to add to the list.    He told me it was something that no one had thought about or mentioned yet.  Being the over-confident and hard-headed individual that I am of course I told him that there was nothing I hadn’t thought about.  He then said “3D” and linked me to the Sony Bravia at Best Buy that you see in the picture below.

Admitting that I had never considered 3D for eBash was my first step towards recovery.  “Hi, my name is Zack and I am a 3D doubter” could have easily been my AA greeting at the time.  Seriously who wants to try and wear those goofy red and blue glasses while they are playing a game.  My first experience with 3D gaming was during a showcase a few years ago with iZ3D and the glasses were uncomfortable and after playing for an hour or more I would get a headache. (author note:  since then iZ3D has released all sorts of new products and this is by no means a valid opinion on current iZ3D models) 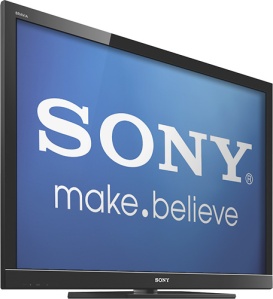 Just to clarify we are not talking about the “3D” movies and games that you can buy at the store and watch/play on your normal TV.  Those just draw a set of red and blue lines on the screen that create the effect for your eyes when you wear the red and blue tinted glasses.  The tint alternating on either eye makes you see the images in a slightly different view giving them “depth”.

Here is a great description of the new technology taken from the Best Buy listing for the Bravia TV:

The glasses run on batteries and sync up with the HDTV through either an infrared or Bluetooth signal. After a certain number of hours, the glasses for some HDTVs can be recharged through a USB connection, while others will need to have their batteries replaced.

As a 3D movie is playing, one frame on the screen will display content only for your left eye, and alternately one frame will display content only for your right eye. Your brain will then combine these two images into one, forming the depth we associate with 3D. Amazingly, within one second, the screen will produce 120 or 240 alternating frames, depending on the HDTV (60 or 120 for your left eye and 60 or 120 for your right).”

Needless to say I was intrigued by the concept.  Those of you that know Shawn realize when we are at this point of research and things have intrigued us then you might as well stand back and get out of his way.  Within a day he was at Best Buy trying out the glasses and watching 3D movies on the Bravia system.  The problem was that they didn’t have any games to try in the store and so far only the PS3 makes 3D capable games.

While I was working with fifty-four 3rd through 5th graders at camp last week I had an email arrive on my Droid from Shawn telling me the TV was ordered and should arrive by the end of the week.  He also had fired up his PS3 and started downloading the 4 games that were 3D ready.  At least with the purchase of the Sony Bravia you also get a code to download the games all for free.

I want to make sure that everyone does realize that the glasses are $149.99.  They have batteries inside and work in harmony with the sensor bar that is mounted on top of the TV almost like the Wii motion sensor.  Remember these are “active shutter glasses” meaning the glasses themselves open and close the lens hundreds of times per second.  We have to be very careful renting these out in the store so that kids are not left alone with a pair!

Most of the employees have played on the system for a few hours now.  However let me highlight a few things I have observed by watching both the employees’ and other customers’ experience with the system.  There are three full games available: Pain, Wipeout HD and Super Stardust HD.  There is also one track demo available in 3D for Motorstorm Pacific Rift.

Games still have to be fun. First of all everyone’s favorite 3D game varies just like normal games.  Shawn and Tucker really enjoy playing Super Stardust HD while Zander and Courtney enjoy playing Pain.  The funny thing is that Zander has now played about 10 hours of Pain and at one point he just asked for the 3D to be turned off.  He was “wowed” by the 3D experience to start but then didn’t really care if the image was 3D or not.  Most people that try Wipeout 3D just play one track and then move onto one of the other games.

Cartoon-style games not as bright. I love racing games and almost blew a gasket when I played the Motorstorm Pacific Rift demo track.  That is the first game I had my brother Andy and my close friend Chad try out when giving them the demo.  It is really the best for putting a true HD environment into a 3D perspective.  However with a game like Pain that is a brightly colored cartoon-style game the colors are really lost when switching to 3D.  That is one reason why I think Zander prefers to play that game without 3D on so the colors are more sharp and bright.

3D in full 1080p is amazing. Playing the Motorstorm game really gave me a new sense on where 3D can take us in the future.  I am not sure how to describe it here that does it justice.  I can tell it is sweet when observing other people who are watching or playing the game while wearing the glasses.  The grass and trees are dimensional.  The other vehicles and dust seems to be all around you.  It is very easy to lose yourself in the game and environment.

A crowd draws a crowd. If no one is playing the TV it doesn’t draw much attention.  However as soon as one person is playing a small crowd will start to form around them.  Everyone wants to put on the glasses and watch.  There are usually a ton of oooohhhs and ahhhhhhs from the spectators around who have glasses.  The funny thing is that some people just stand and watch without glasses.  This new technology is not nearly as blurry as the old red/blue 3D images without the glasses on.

I am very anxious to start trying out other genres (Killzone 3 is going to be full 3D!) but just the one free trial track in Motorstorm was enough to turn me from a doubter into a believer.  I hate to jump on the bandwagon after being such a hater but it does seem like 3D is the next step for gaming.  I still have never climbed on the Wii bandwagon and think it is more of a gimmick than gaming but you can’t ignore the sales numbers for their systems or their games.

If you are close enough to eBash then come down to try it out and let me know what you think!