After 7 years of being in the Video Game (LAN) Center business the #1 question I have to answer is still “Why Do Gamers Play at eBash instead of just playing at home?”  This is asked by new potential customers browsing the store for the first time, friends I have met that ask what I do for a living or even by long time friends and relatives that still just can’t understand it.

The short answer I always give is “for the social aspects”.  This just refers to a human’s desire to interact with other humans.  You can’t really get the same satisfaction from uttering “gg” into a microphone from your bedroom alone as turning to your partner beside you and giving them a high five.

Looking at why gamers play at LAN centers (or looking why any customer supports ANY business) is a great exercise in staying on top of you industry and continuing to bring business through the front door.  Today I thought I would share some of the observations I have made over the years at both eBash and my other companies that apply to the LAN center business.

#1 – People. There may be a few introverts that just show up and bury themselves in the back room of the store to play all day but I would almost guarantee that almost every customer plays at a game center because of someone else.  It is sort of like a mult-level marketing scheme and is one big difference from most other business models. 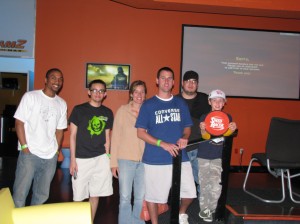 The #1 reason for gamers to go to LAN centers is the people.

It starts at the top from the person/people starting the company.  They make contact with the very first customers directly and also hire all of the employees.  Their personality can either hype up the store and make it fun for everyone or just go through the motions and focus on only the technical appeal of the store.  A game center ran by someone with a great personality is a full game center if all other things are equal.

This is the social aspect of the business also that is so crucial.  The “Norm” effect for any of you who have watched old Cheers episodes.  People by nature want to be “liked” and feel wanted.  They want to go where everyone knows their name.  And most of the time players just want to get out of the house and go DO something anyway if they are still living at home with mom and dad.

#2 Technology (working) – I believe that the technology draws people in the door sometimes initially.  After all that is the love that we all share together is the Christmas morning feeling of opening the latest game, trying out the latest headset or using the latest gaming mouse.  This is probably the reason that the store was started in the first place, because of the love of technology by the owners/founders.  I also added (working) to the item because this is so important when customers visit to have stations working.  Nothing is worse for a customer’s first experience than having difficulty getting something to operate correctly.

Along with the initial technology one thing we have identified at eBash is the importance of a store “refresh” consistently.  We have called these projects “Operation Platypus” since 2006 and we ride the hype of the changes for 30 days before the event.  Sometimes if the project is big we will close for a day or two during the slowest days of the week, black out the store windows/cameras and then have a big reveal once the project is finished.  Just spending money on “maintenance” is not enough.  You MUST continue to change out equipment.  Our rule of thumb is a 2 years cycle on all PC equipment and a 3 year cycle on console equipment.  In those time frames you better rotate in new monitors, TVs, headsets, chairs, mice, keyboards and make the change BIG!

#3 Variety – This goes along with technology but one thing I have noticed is that IF (big IF) you are keeping up with #2 above then you are probably making things available for customers that they do not have at home.  Sure, everyone has a computer for WoW at home or they have their Xbox 360 with HD TV at home.  But even those that are wealthy cannot keep up with every little gadget and gizmo that is coming out in the market.  And remember our customers LOVE technology so you can never have too many new things for them to try.

#4 Events – This is the most overlooked aspect from most game centers simply because it is so much work with so little DIRECT benefit.  I should go through the iGames forums and add up how many times owners and managers complain about tournaments, overnight events and launch parties compared to the number that are behind things like birthday parties.

Tournaments have been a big draw for us at eBash.

Birthday parties are important to most centers because you are just basically providing the customer an extra value service (reserved seats and sometimes other benefits) while getting a nice big group of players all at once.  AND you get to charge for it.  Other events like tournaments sometimes might even seem like a money wasting event but let me give an example.

Tuesdays this summer we have started Facebook Tuesdays.  If a customer is a fan of our facebook page and announces on their status with tags that they are going to eBash Terre Haute along with their friend’s names they can play for as little as $2 for the ENTIRE DAY.  Why in the world would we sell time for so little?

Well every Tuesday our total sales are equal or HIGHER this summer than the other days and it previously was our slowest day of the week.  Customers still leave the house with the same amount of money but they are just spending most of it on snacks/drinks instead of on game time.  This isn’t as profitable obviously since those items have a Cost of Goods Sold (COGS) associated with them but the “sale” of game time gives them the incentive to come play when they might have just stayed home instead.  Also we have seen an increase in sales on Wednesdays also which I believe is because gamers see each other Tuesday, get really involved in a game with their friends, and decide to come back the next day to keep playing.

I won’t go into the tournament aspects as that will be a feature by itself in the coming weeks.

# 5 Facilities/Atmosphere – The place where the gamer is going  to play is also part of the big draw over playing at home.  Not necessarily the technology, obviously you need to have a network installed for 100 stations to work together, but more from the standpoint of just the “feeling” you have in the building.

If a center just lines up computers in long rows inside of a strip mall I would almost bet they will struggle to stay afloat or be closed in less than 2 years.  Even with the best marketing and all of the right equipment if the atmosphere is not right for your business then once again you are not giving your gamers a reason to leave their easy chair at home.

Here is an exercise that I am going to try at our store over the next 6 months that hopefully will solve this problem.  I am going to give all of our employees an extra paid shift to play games.  This will get them out playing with the customers and build the social aspect, but I am going to have them be very conscience of their atmosphere and surroundings and also require that they move around each week to different rooms in the center.

As you and your employees (or best customers) play at your store pay attention to what would make you play longer at the center instead of at home.  In my family for example my wife Janean loves to play Civilization Revolution on the Xbox 360 if she is playing solo.  My son Zander will play either Xbox 360 or something on the computer by himself.  I am happy to do either.  If we all 3 decide to play Lord of the Rings: Battle for Middle Earth together we just sit down in one of the computer areas to play.

However if Zander wants to play Command and Conquer Red Alert 3 on the computer while Janean plays Civ Rev they won’t play as long because they can’t sit together.  We have almost 100 stations in the store but they have been almost “quarantined” from each other.  Now I am looking at one section with 2 Xbox systems next to 2 PC stations for groups that come to the store and want to play together but not necessarily play the same system.

#6 – ? Underlying Theme – As I look back through this list of items I know that there are probably more that some of you can help me identify.  However it seems that the recurring theme in all of them is…. work.  All of the important aspects of running a successful LAN center involves getting off your butt and getting things done.  If you are content to just go through the motions then that attitude will pass through to your employees and customers and your store will become lethargic and slowly decay.

I look forward over the next few days sharing some of the new ideas and changes we are implementing at eBash Terre Haute as well as hearing suggestions from customers and ideas from other LAN center owners.

6 thoughts on “Why Gamers Play at LAN Centers”