Painting/Construction of the very first eBash location. We learned the hard way!

eBash is turning 10 years old this month.  The official date we opened was December 10th, 2004.  We will celebrate at our stores the weekend after that day since the 10th this year is a Wednesday.  However the real celebration for us is the fact that after 10 years we are looking to re-invent the LAN Center model worldwide.

There is still a real disconnect between “Why would I pay to play at a LAN Center” and the typical answer that all owners like myself immediately answer with: “Because it is more fun to play together in person”.  The problem is that there is not honestly a tangible reason for players to come to our stores.  Playing socially in the same physically space is not a REAL reason.

From 10 years of experience here is a REAL list of reasons players come to a LAN Center:

– For a special event.  Celebrate a birthday, play in a tournament, try out a new game, relatives in town want something to do, etc.  This has always been true and is almost always the best way for finding new long term customers if you make the experience epic enough.
– To get some independence from mom & dad (middle/high school age) or from spouse/kids (older adults).   Lots of gamers love our overnight events and lots of parents/spouses love that option also.  Mom and Dad want a night out?  Your wife going to an all-weekend event with her friends?  Your daughter having 3 screaming friends over to play Just Dance 3 all night?  All good reasons to head to the local LAN Center.
– For the convenience of larger gatherings to play games on different systems.  Many players are all about bringing their systems to each other’s houses to play all weekend, but there is a break point of 2-3 friends when it becomes nearly impossible.  If you want to play League of Legends all weekend together with 4 other friends on your team the reality of 5 players having somewhere to all setup, the systems for all 5, the network/internet and somewhere they won’t bother other residents of the abode is very unlikely.
– Lack of a good gaming set-up at home.  This is becoming even more rare, but we still even see customers show up that have been gone for years when their PC is on the fritz, or they forgot to pay their internet bill or they are fighting with their parents/spouse.

Those are all great reasons, but none of them really lend themselves to a reason to play at the center more than a few times each month other than a lack of a good gaming set-up at home.  And I still don’t seem many players ACTUALLY coming to play for the reason all game centers claim is the best, for the social experience.

A little over a year ago it came to me the idea of putting a REAL reason out there for gamers of all ages/skills to visit their local game center.  I wanted to use what I feel is our biggest asset to reach gamers all over the world.  We are LOCAL.

LAN stands for Local Area Network.  There is always things happening online for gamers, there is even big huge events happening in large cities periodically.  The one thing that we don’t have going for gamers is consistent and plentiful events somewhere nearby.  The two things lacking to do this in a LAN Center is that owners don’t have the time or the drive/desire.  I have plenty of drive/desire but I cannot even keep up.  Sadly beyond the time is that many LAN Center owners are gamers first and business owners second.  So the drive/desire is not even present.

Just quickly, let me clarify that “Events” is not just huge things like tournaments.  Events to me are things with a purpose and a scheduled specific happening.  LAN centers try to do this sometimes with a specific weeknight dedicated to a particular game.  We hold a “lock-in” every weekend that is not really more than us staying open all night, but we make it an event by “locking” the doors from the outside at midnight.

So what is holding us (LAN Centers) all back?  Time?  Nah, if my idea is correct and we can double sales in LAN Centers by running consistent events then we would just hire more people to handle the extra work/time.  I finally identified what I think is the main problem for all of us in the LAN Center Industry.

We need an automated system to promote, host and archive events of all kinds.

So here is just a little bit of what we are working on: 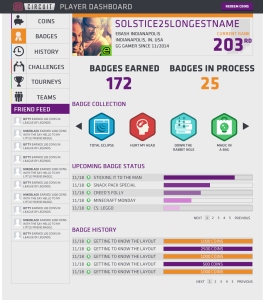 Here is a screenshot of one of the dashboard pages that players can use to track their progress.

– 6 months ago we began development on a new software system which runs on top of our center management and POS (Point of Sale) software.  That system started in beta at our eBash stores with integration for RIOT’s popular game, League of Legends.  The entire purpose is to track what players are doing and reward them for accomplishments both in-game and in the local store.

– We added 4 stores in Sweden, owned by Good Game and Escape Gaming to the system in late October.  We wanted to test our formulas and architecture in the European environment.  We also added PC Gamerz out of Hawaii so we would have an additional North American partner as well as someone in about the latest possible time zone in the world.

– Now we are reaching out to add 40 more centers before the end of the year.  We have a dozen lined up just through word of mouth.  We will be doing some marketing and other outreach starting this week.

What are some of the highlights of this system?  Here are some main things that I am the most excited about :

This is a big task.  Not only has eBash shouldered the burden of the initial development of this software (currently already in the tens of thousands of dollars) I am also personally making it my mission to unite a group of extremely independent owners around the world to play nice together.  However so far the response has been very good and over the years I have made some great friends in the LAN Center industry that are grabbing my hand to join in the push.  We will see what the next 6 weeks has in store for us.

It could very well be the biggest jump in our business since the day we opened 10 years ago and the biggest leap forward this industry has seen.