My good friend and partner Shawn (nite423) loves to dabble with new toys.  I guess all of us in this industry are the same way but he seems to really get the “itch” sometimes to go after new things.  A few months ago he bought a new printer on eBay that is able to make poster and banner sized prints.  Actually I think it might be called a plotter, specifically it is an Epson Stylus PRO 7600.  That is about the extent of my knowledge and that just comes from looking at the label on the front of the machine. 🙂

One of Shawn's masterpieces laying on a 6 foot table. My phone camera doesn't do this glossy beauty justice.

After it blew up in shipping to us, fighting with the seller to get a refund, taking it to a local repair store to get it fixed and tons of tweaking on his part the bad boy was up-and-running a few weeks ago.  He immediately started printing all sorts of awesome graphics to hang in the store and even is making some special request pieces for customers.  The thing is amazing and easily is worth the money 10 times over.  I would recommend every game center and even other business owners look into getting one.  Don’t go after a new one unless you just want a nice tax write-off.  Check eBay and other sites and there are other newer models and different manufacturers also that make these printers.

So what does it have to do with a Video Game Center Leaderboard?  Bear with me a bit longer.  A few months ago at our employee meeting Tucker (ee Loque) suggested that we have a leaderboard in the lobby of the store to show which customers have the high score in certain games.  Personally I think this idea is outstanding because the entire concept of the arcade business back in the 80s was feeding off the competitive nature of humans trying to get their name at the top of the list.

At that time we moved an unused 52″ HDTV flat screen to the lobby and mounted it on the wall.  (Yes, I said unused 52″, but that is another story…)  As Dustin (ee TheBum) started working on leaderboard graphics to put onto the screen we ran into the problem of how to display them without causing screen burn.  We wanted a uniform leaderboard but would have to make unique screens for every game to make sure we didn’t line-up the same graphics in the same spot causing the screen to “burn in” the image.

Next thing we knew it was the busy holiday season and the Xbox Kinect came out.  We moved this 52″ HDTV into a private room for the Kinect and put back a 32″ screen in its place.  We use that screen now along with another one in the lobby to stream game trailers for upcoming games.  We sort of forgot about the leaderboard concept.

Then two weeks ago Shawn got one of the two pinball machines going again. (Yet another long story)  The Twilight Zone is an amazing pinball machine and highly addictive to play.  We have them on free play in the store and anyone with time on their account is welcome to play.  It didn’t take long before Logan (Dr Mario65), one of Tucker’s roommates and long-time eBash customer, had the top score on the machine.  Tucker is a big pinball fan and is furiously trying to take down that record right now and Logan reminds Tucker every chance he can get that he is #1.

So… larger printer, leaderboard idea, pinball, high scores and Tucker’s obession with pinball came into play at the employee meeting last night.  We were discussing together what other events or structured formats we could put into place for the store to give players more purpose when playing.  Tucker said “What did we ever do with the leaderboard idea a few months ago” and we were off to brainstorming again and finally put all of those things together. 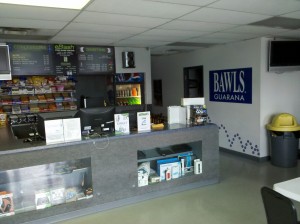 The leaderboard will go where the BAWLS sign is hanging to the right of the front counter.

We have a large wall right at the front counter with BAWLS advertising information from and old partnership with them.  We are going to take that down and start a leaderboard wall right in plain view of every customer in the store.  This isn’t just about having the high score, we have events and fun challenges all of the time at eBash and this is going to give us a way to keep track of them.  The new printer is KEY to making this awesome right up front.  A few examples we are thinking of starting with:

– We usually hold a BFB (Battle for the Banner) event every 18 months.  The past winners have gotten banners (or should have gotten banners) posted in the store with their team name and player roster.  We will have one section of the leaderboard for all of the past BFB events.

– I do a fun thing with customers who play with me personally where we try to win as many games in-a-row online as possible.  We started that with Halo 2 and currently our games are Black Ops on Xbox 360 and League of Legends on PC.  I put carrots along the way as rewards starting with one level that will earn each player a free “power pack” which is a drink, candy bar and bag of chips of their choice.  The next level will get each player a free day pass and the top goal reward is a week pass.  Recently a group of us made it to the 30 in-a-row mark in Black Ops.  So the names of Fred (Stinkyg0at), Skylar (Boonzing), Johnny (B0onzing), Didier (2Good2BMyFriend?), Hobie (xxKITHxx) and I will all start off on the leaderboard wall.

– We will feature a leaderboard vs. other game centers in parallel with the new Game Center Matchmaking service I am starting.

– Some simple ones might just be the top players in the most popular games.  Most wins in League of Legends, top win percentage in Black Ops, etc.

– We are thinking of giving the “King(s)” of their respective leaderboards the ability to purchase drinks in the store for only $1.  As long as they stay on top they will have that honor.

We have a few more ideas for the leaderboard wall, hall of fame wall, king of the hill wall or whatever we decide to call it.  The key is having the most popular games featured right up front.  After newer games replace them instead of wasting those leaderboards we will move them down the hallway until the entire hall is full of different leaderboards and players can see their titles and names live on in glory forever.  Who knows… maybe in a few years someone will think they can get more than 30 games in-a-row in Black Ops and try to take the title from us????